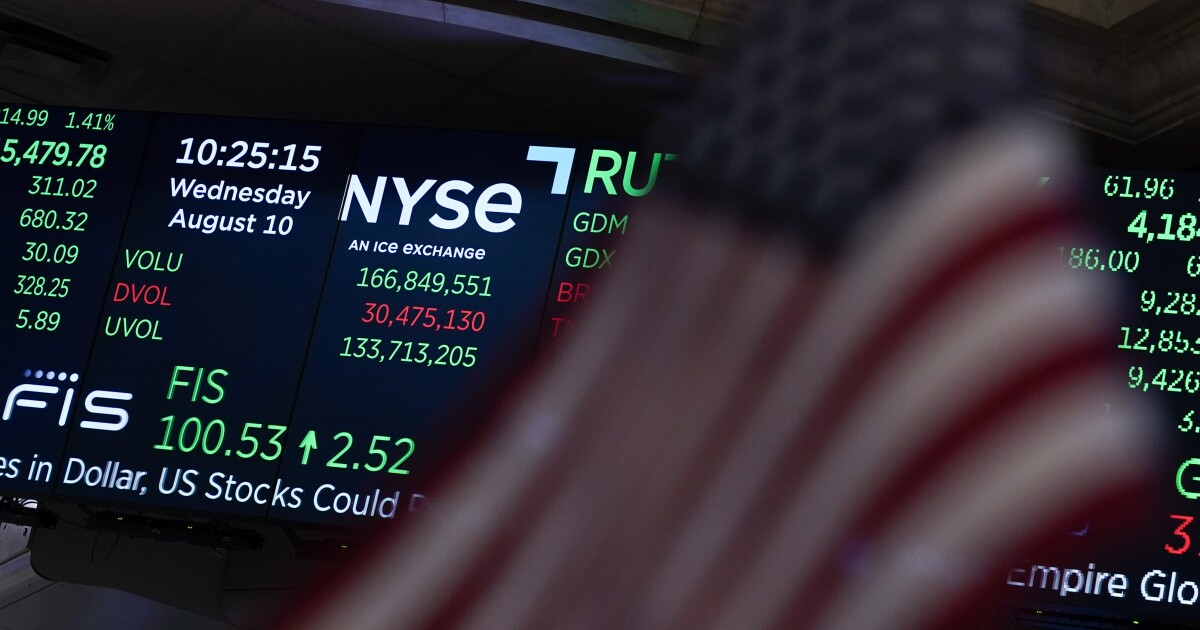 Stocks tumble in disappointment on Friday after the head of the Federal Reserve dashed hopes on Wall Street that he could soon ease the brakes on the economy.

The S&P 500 was down 1.9% after Jerome Powell said the Fed will likely have to keep interest rates high enough to slow the economy “for a while” to fend off high inflation sweeping the country. Short-term Treasury yields climbed as traders bet the Fed would stay aggressive with rates.

The Dow Jones Industrial Average was down 521 points, or 1.6%, at 32,770 as of 11:45 a.m. EST, and the Nasdaq composite was down 2.4%. The indices went back and forth as investors struggled to understand the meaning of Powell’s highly anticipated speech. Stocks first fell, then erased almost all of the losses, then came back down.

Powell’s speech follows several other Fed officials, who have recently pushed back against speculation that the Fed may ease its interest rate hikes. The increases help contain inflation, but they also hurt the economy and investment prices.

Powell acknowledged that the increases will hurt American households and businesses, perhaps in a tacit nod to the possibility of a recession. But he also said the pain would be far greater if inflation was allowed to fester and that “we have to keep going until the job is done”.

He was speaking at an annual economic symposium in Jackson Hole, Wyoming, which has been the scene of market-moving Fed speeches in the past.

“He basically said there’s going to be pain and they won’t and can’t stop going up until inflation comes down a lot,” said Brian Jacobsen, senior investment strategist at Allspring Global Investments. “It was a thankfully short and to the point speech. Powell didn’t really innovate, which is good since Jackson Hole isn’t a political meeting.

Expectations had been building over the week that Powell would try to quell recent talk of a Fed “pivot.” Such speculation had helped stocks rise throughout the summer. Some investors were even saying that the Fed could cut interest rates later in 2023, as pressures on the economy increase and the country’s high inflation hopefully recedes.

But Powell’s speech made it clear the Fed would accept weaker growth for a while in an effort to keep inflation under control, analysts said.

“Powell reiterated that the Fed is worried about rising prices and getting inflation under control is clearly task number one,” said Jeff Klingelhofer, co-chief investment officer at Thornburg Investment Management.

Perhaps giving investors some hope, some analysts said Powell seemed to indicate that expectations for future inflation are not taking off. If that were to happen, it could cause a self-perpetuating cycle that would make inflation worse.

A report released on Friday said U.S. consumers expect long-term annual inflation of 2.9%, which is at the lower end of the 2.9% to 3.1% range seen in the US. survey from the University of Michigan over the past year.

For now, the debate on Wall Street is whether the Fed will raise short-term rates by half a percentage point next month, double the usual margin, or by three-quarters of a point. The last two Fed hikes have been 0.75 points, and a slight majority of bets on Wall Street favor a third such hike in September, according to CME Group.

A report on Friday morning showed that the The Fed’s favorite inflation gauge has slowed last month and hasn’t been as bad as many economists expected. This is a potentially encouraging signal, which may further embolden Wall Street to say that the worst of inflation is already over or soon will be.

Following reports and comments from Powell, the two-year Treasury yield rose to 3.40% from 3.37% on Thursday night. It tends to track expectations for Fed action.

The 10-year Treasury yield, which tracks expectations for longer-term economic growth and inflation, fell to 3.01% from 3.03%.

The Fed has already raised its overnight rate four times this year in hopes of curbing the worst inflation in decades. The increases have already hurt the housing industry, where higher mortgage rates have dampened activity. But the labor market remained strong, helping to support the economy.

On the stock market, Ulta Beauty was among the few in the S&P 500 to rise. It gained 0.6% after the retailer reported higher-than-expected earnings for the last quarter. Perhaps more importantly, it raised its full-year revenue and profit forecast. Other retailers have lowered their forecasts as high inflation squeezes their customers, especially low-income ones.