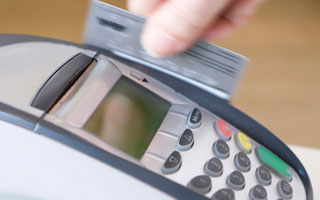 Nothing could be further from the truth. Merchants have complained about fees for two decades, but it’s been a dozen years since Congress took action, and only on debit cards. No legislation was introduced and traders only called for transparency and competition. Banks should compete like any other business.
Swipe fees have skyrocketed 70 percent over the past decade, reaching $110.3 billion in 2020 when debit cards are included. That’s 10 times before the pandemic Hollywood box office receipts and seven times NFL ticket sales. And the lack of competition is the reason. Visa and Mastercard, which control 80% of the market, centrally set the fees charged by the thousands of banks that issue their cards rather than banks competing to give merchants the best deal. Merchants have long argued in court and before Congress that the practice violates federal antitrust law, but nothing has been done. Local community banks and credit unions see little, with the top eight card-issuing megabanks accounting for 80% of the credit card market.

These fees represent the highest cost of operation for most merchants after labor and drive up prices for consumers at a time when they can least afford it, amounting to $700 per year for the average family. The fee is a percentage of the purchase price, meaning banks collect more as prices rise, creating a multiplier effect for inflation. Banks could see nearly 8% revenue growth at current inflation rates without lifting a finger, with consumers eventually footing the bill.

Consumers and merchants have been spared the debit card reforms. In the first five years after the rate reform, the producer price index increased by 9.4%. On the other hand, the consumer price index only increased by 4.5%, or less than half. This is partly because merchants have used throughput savings to limit price increases. More recently, the PPI climbed 9.7% in 2021, plagued by inflation, but the CPI only rose 7%, further proof that merchants are protecting their customers.

Renowned economist Richard Shapiro found that 70% of the savings on debits were passed on to consumers. Even the Card Industry Electronic Payments Coalition recently stated “Three quarters of traders have not changed their pricesafter the reform – clear evidence that the reform has avoided increases.

Banks erroneously cite the Federal Reserve’s rule on debit card swiping fees as a price control. But they ignore that banks with less than $10 billion in assets are exempt, and that big banks are also exempt as long as they set swipe fees independently rather than following fees set by Visa and Mastercard. . Why not compete? Perhaps because even regulated banks make more than five times the Federal Reserve’s current estimate of the average cost for banks to process a transaction. Details aside, this is a red herring because no one – no one – is calling for the same regulations for credit cards.

Banks admit they pay for credit card rewards through swipe fees and say they couldn’t afford to continue them if fees were reduced. But they dismiss several studies showing the practice means rewards are paid for by all consumers – including the poor – while they are mostly redeemed by the wealthy. And bank profits suggest there is plenty of room to pay out rewards without slipping – and experience in many other countries shows that rewards continue with much lower fees.

A bipartisan push to cut food costs by protecting American farmers If history repeats itself, the United States must be ready

The year before the reform, Visa’s net margins were a hefty 36 percent. By 2021, they had skyrocketed to the astronomical figure of 52%. MasterCard increased from 29% to 46% and JPMorgan Chase, the nation’s largest credit card issuer, more than quadrupled from 8% to 37%. Meanwhile, the net margins of money center banks currently average 33 percent, compared to less than 3% for retailers. Clearly, it is the big banks and card networks – not merchants – that have lined their pockets since the reform.

Finally, the banks claim that low-income people have lost access to banking services due to swipe fee reform. In reality, FDIC says only 5% of Americans were ‘unbanked’ in 2019the lowest level on record and down from 8% just before the reform.

Interestingly, more than a third of those who don’t have a bank account told the FDIC it was because they “don’t trust banks.” This is an interesting comment to keep in mind when looking at claims made by banks regarding swipe fees.

Leon Buck is a member of the executive committee of the Merchant Payments Coalition, which represents merchants that accept credit and debit cards. He is also Vice President of Government Relations, Banking and Financial Services at the National Retail Federation.