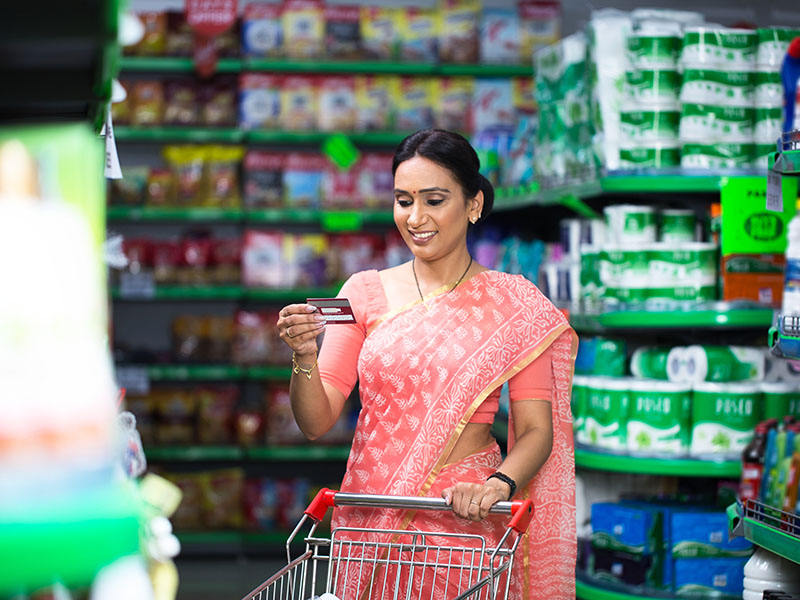 
India is leading the way beyond most developed economies in digital payments. According to numerous reports, 48 ​​billion transactions took place in 2021 via UPI India is well ahead of economies like China which records around 18 billion transactions in 2021 and has 6.5 times more than the US, UK and Germany Image: Shutterstock

UPI and how it enabled digital transactions in the country
The Reserve Bank of India (RBI), after the resounding success of the Unified Payment Interface (UPI), announced the link between credit cards and UPI. This move will position India as one of the pioneering countries in digital payments by providing the added convenience of paying by credit. By doing so, the Indian economy will not only receive a boost but also expand the influence of its financial systems beyond the country.

UPI enabled faster Peer-To-Peer (p2p) and Peer-To-Merchant (p2m) transactions. Introduced in 2016, UPI has not only revolutionized payments, but has also been a boon to a rapidly growing economy, whose young demographics and startup ecosystem are well positioned to take advantage of this development. UPI’s success also prompted other countries to attempt to replicate it. Today, countries like UAE and Singapore have adopted UPI to facilitate transactions for Indian consumers.

India is leading the way beyond most developed economies in digital payments. According to numerous reports, 48 ​​billion transactions took place in 2021 via UPI India is well ahead of economies like China, which recorded around 18 billion transactions in 2021 and has 6.5 times more than the United States, the United Kingdom and Germany. Demonetization, with its short-term inconveniences, has endowed our developing country with an amplified use of digital payment gateways. While there were surcharges for keeping a swipe machine for cards, UPI/digital payment options arrived without these fixed costs to consumers. The lack of tariffs for UPI has led everyone from small roadside vendors to larger stores to embrace digital payments. It also added another layer of convenience for the end user. One could have a smartphone, which would also do the job of one’s wallet.

With young demographics and growing adoption of smartphones, the importance and reach of UPI will only increase. Additionally, following RBI’s announcement on March 8, 2022, UPI transactions will also become a standard feature in non-smartphones, with the 123Pay UPI positioned to allow people with feature phones to take advantage of this payment functionality. With the ability to use an IVR (voice-based system), missed calls, and a dedicated app for feature phones, UPI transactions will also enable millions of people without smartphones to benefit from digital transactions. Once this decision is launched, India will become a global powerhouse in financial transactions, mainly driven by UPI.

What is the reason for enabling credit card integration with UPI?

RBI has added another form of convenience by integrating credit cards with UPI. It is not necessary to have cash in the bank to take advantage of the UPI facility. This has its own set of pros and cons. One of the most important advantages of this facility is that when one’s money is parked in ETFs, mutual funds and real estate, one has to keep little cash at rest in low-yielding bank accounts or with no return and pay as much as you spend later. With this facility, people no longer have to worry about paying for goods, especially small bill transactions like restaurants and groceries, if one does not have cash at that time. For the youth of urban India, who are known to be savvy in investments and savings, this facility will further foster the culture of saving and investing while being conservative in their spending habits. – after all, using the UPI adds convenience. However, this does not change the fundamental principle of refunding money used on credit.

Also Read: How Co-Lending is Changing the Credit Landscape in India

Apart from the youth of urban India, the move will also make it easier for the low-income segment of Tier II and III cities to revert to short-term credits, which could make property more accessible. Why do we say “go back”? This is because in ancient times, or probably even now, many small sellers relied on keeping a “Khaata” or credit account for their regular customers and making weekly or monthly payments. This is especially prevalent when the trust factor is high and customers’ shopping times do not coincide with their income. The credit card linked to the UPI will do so with the additional benefits. Switching to digital credits will drastically reduce the likelihood of the merchant cheating customers into overwriting monthly accounts. Moreover, since a large percentage of the rural and small town economy is based on the concept of credit, the increased transparency will allow this financial system to function smoothly.

One potential use for the unbanked sections of Indian society, which could revolutionize more people’s access to banking, is the use of a credit card to establish one’s credit history. a person and establish his solvency. Since UPI addresses (and therefore bank accounts) can be linked to Aadhar cards, for people with no credit history, banks can provide them with short-term credit cards with modest credit limits (say 10,000 ). The very first benefit of this would be to introduce the unbanked to credit that can be spent, repaid, and monitored, thereby educating them on concepts such as credit cards, digital banking, and mobile banking.

With this new awareness, they can take a proactive role in managing their finances. If they default, their newly established creditworthiness will suffer and they will be rendered ineligible for other loans such as home loans, small business loans, car loans, etc. Although a certain percentage of default may occur, banks can minimize it by using automatic debit blocking and running an extensive awareness campaign emphasizing the importance of using credit wisely and paying it back on time.

Moreover, the link with the Aadhar card will also bring the other bank accounts of the person in the picture. If the credit money is not paid beyond a certain period of default, the banks will also block the person’s other linked accounts and debit methods until they release the payment. Mobile phone companies are already using similar functionality like this through rental-based mobile phone sales. If one does not pay the lease amount, the company locks all functionality of the mobile phone, thus forcing the customer to make the payment.

Considering the many potential benefits to Indian society in terms of ease of transaction, increased enrollment in the banking system, and more remarkable growth of financial systems that promote transparency, it may seem that there is no of traps. However, there are some concerns and potential drawbacks that should be kept in mind. Indians spend on average 67% of their income, while in the United States, this proportion is just over 100%. This led to many short-term debt defaults in the United States. Ease and access to short-term credit encourage short-term, gratification-oriented thinking. With its much smaller per capita economy, an economy like India cannot afford to be on the American path.

Furthermore, while this path can create a lucrative retail-friendly economy, it comes with the potential threat of default cycles that can trigger recession cycles, severely affecting the economy. While high per capita economies with huge amounts of tax revenue have the cushion to feed their people in these difficult times, it is hard to see how a low per capita economy like India would cope with the same. Another concern is that in a country where banks are notorious for using heavy-handed tactics to claw back some people’s money while being soft on larger companies, reckless use of this facility may encourage even more inequality. financial.

India’s move towards UPI and cashless payments plays a central role in the evolution of the Indian economy. Issues such as Merchant Discount Rate (MDR) and their variation across providers such as Visa, RuPay and MasterCard have yet to be resolved. Moreover, the use of this facility in B2B business and how it will differ from B2C still needs to be ironed out.

Another issue that needs to be addressed is the mitigation of black money and clandestine transactions. One solution is that by even including credit-based transactions as part of the UPI, the likelihood of more transparent transactions will be greatly increased. Furthermore, it will be an important step in introducing digital transactions to the informal sectors of the economy. For urban India, this allows yet another mode of transaction that combines credit and UPI.

Despite the potential pitfalls and the need to clarify several aspects of implementation, the author is confident that, given the traditionally conservative nature of Indian finance, this decision will enhance people’s ease of payment while transforming the Indian economy. Systematic implementation in gradual stages and close monitoring of its effects on the economy will reap the benefits while avoiding some potential downsides.

The authors predict the following: a massive increase in financial literacy across the country, better connectivity between remote parts of the country and the
cities due to increased financial connections, increased prosperity of the rural population as they take charge of their finances, increased influence and growth of public sector banks (and hopefully, better management) and greater transparency in Indian finance and economy.

Abhinav Gupta is a PGP student and President of the Public Policy Club at the Indian School of Business (ISB). Avik Sarkar is a professor at ISB, and his work focuses on the interface of public policy and technology.

Check out our anniversary discounts on subscriptions, up to 50% off website price, free digital access with print. Use promo code: ANN2022P for print and ANN2022D for digital. Click here for more details.


[This article has been reproduced with permission from ISBInsight, the research publication of the Indian School of Business, India]

Why interest rates won’t impact the business for sale market